Holy sh**t that’s steep, not sure I can go…stop thinking do it, off the brakes let go, yeow, twist the hips into the corner, ok I’m alive, compose yourself ready for the next bit, braap loamy corner, and another… This was hands down the steepest and most technical enduro race I’ve ever done, EWS and Trans Savoie included.

Deep in the French speaking Swiss Jura there is a tiny village called Mervelier surrounded by innocent looking little limestone hills. The place is the unexpected home to Magma Bike the Swiss Banshee distributors, and JUride a bunch of incrediley passionate trail builders. In the woods behind the village this small group of passionate guys have been busy constructing a network of mountain bike trails, the easiest of which would challenge most good riders. The skill and knowledge put into these trails has to be seen to be believed, steep sections drop into perfectly formed catch berms, incredibly technical lines have been picked out through the rocky outcrops of limestone, off-camber traverses built up to hold your bike. People building most of the rubbish motorway style goober friendly shite you find in the Swiss Alpine resorts could learn a thing or two by coming here. 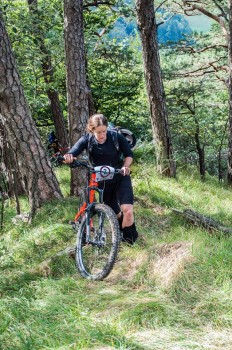 The race itself was mental. I didn’t have time to practice most of the trails so rode a lot of it blind, and quickly realised neither my body or mind were recovered enough from the Trans Savoie to go full gas into a race. Too late! Never the less I found myself riding things that if I had have had chance to stop at the top and look, there is no way I’d have gone down. Sometimes it was the sheer length and steepness that was the challenge, other times the sharp rugged limestone rocks littering the trail provided a huge technical challenge.  I had a massive stack on one near vertical long chute where i didn’t turn in time and went hurtling down the hill ending up with a massive dead leg, which left has me hobbling around like an idiot ever since.

In between the sketchy bits it was incredible fun. Deep loam, incredible tacky grip, switchback and catch berm gallore. The way the trails are built means you are able to get down things which on first look are super steep and scary. There was very little pedaling in the stages but with 1900m climbing over 26 km it was a big day out. The stages got progressively harder, culminating in Delerium, a track which scared even some former world cup downhill riders and left me so physically and mentally fried that I was taking breaks along the way to compose myself before the next technical onslaught!. Overall I was happy to survive and finish 2nd to the incredibly fast top 10 EWS rider Melanie Pugin. I wouldn’t like every race to be this tough but its great to push your comfort zone from time to time!

The race was part of Juride Days, a bike festival which brought people from miles around. Also behind the village is a bike park with some huge dirt jumps and north shore which was at the centre of the race village. Back-flips and 360s were the order of the day for a best trick contest, there was a DJ, live music, food and a party late into the night. The contrast between people and lifestyle here and that in Zürich is amazing and its worth a visit for that alone. The guys involved are some of the most friendly, open, passionate (and crazy) people you can ever meet and they for sure know how to ride bikes.

The race was the first of the Helveti’ Cup, a mini 4 race series in the French speaking part of Switzerland. Great to finally see some racing here, looking forward to the rest!